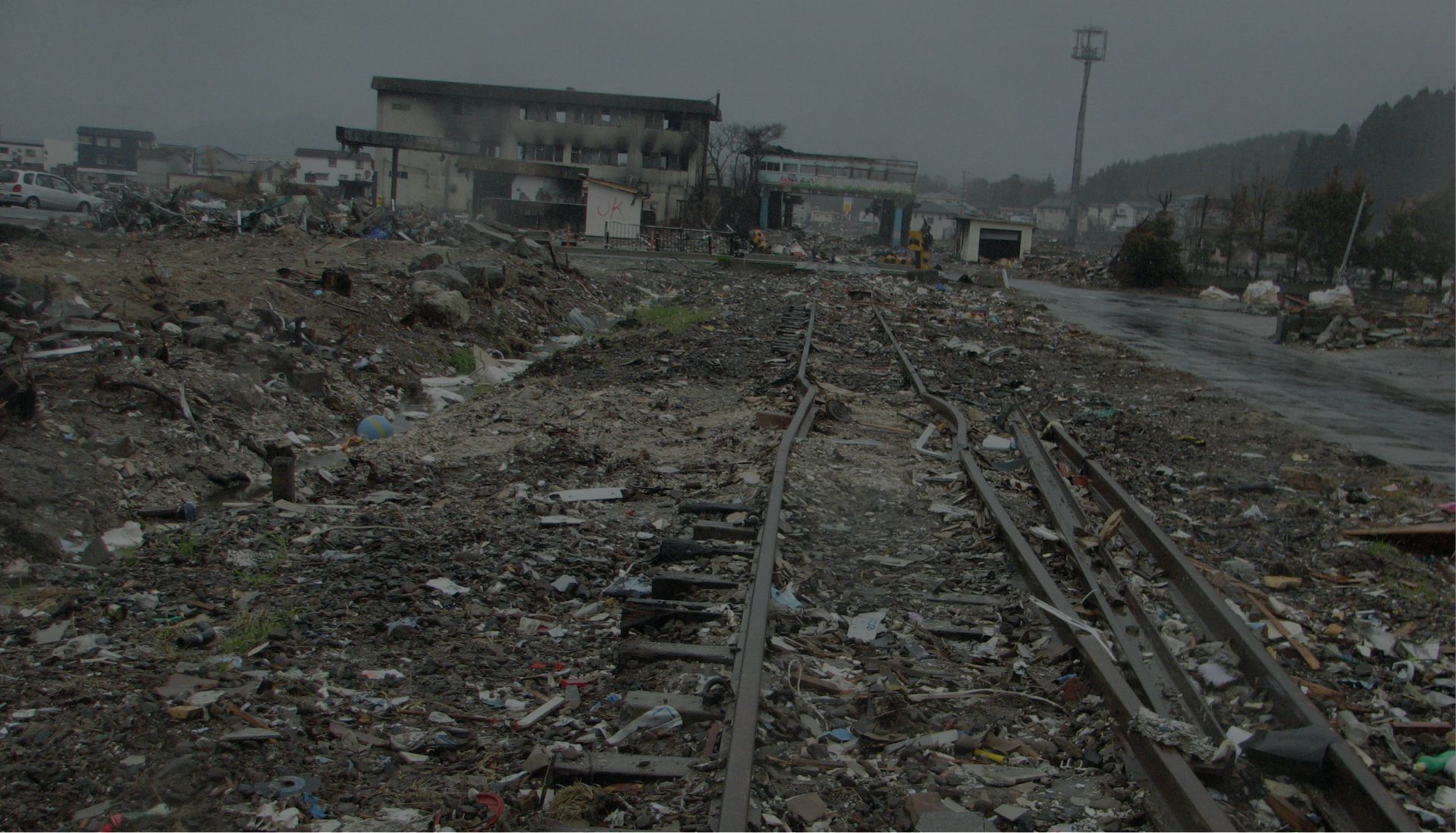 Obayashi Corporation considers disaster recovery to be one of its key social missions as a construction company, and therefore focuses its efforts on restoring infrastructure and aiding reconstruction in the event of a disaster.

In the 2011 earthquake off the Pacific coast of Tohoku, large tremors followed by a massive tsunami generated a mixture of over 20 million tons of debris, caused a serious incident at the Fukushima Daiichi Nuclear Power Plant, and tore apart countless communities.

Immediately after the earthquake, the company fully utilized its abilities in procuring personnel, materials, and other resources to urgently restore public infrastructure. It also poured all its strength as a construction company into helping restore the lives of people from the affected areas. 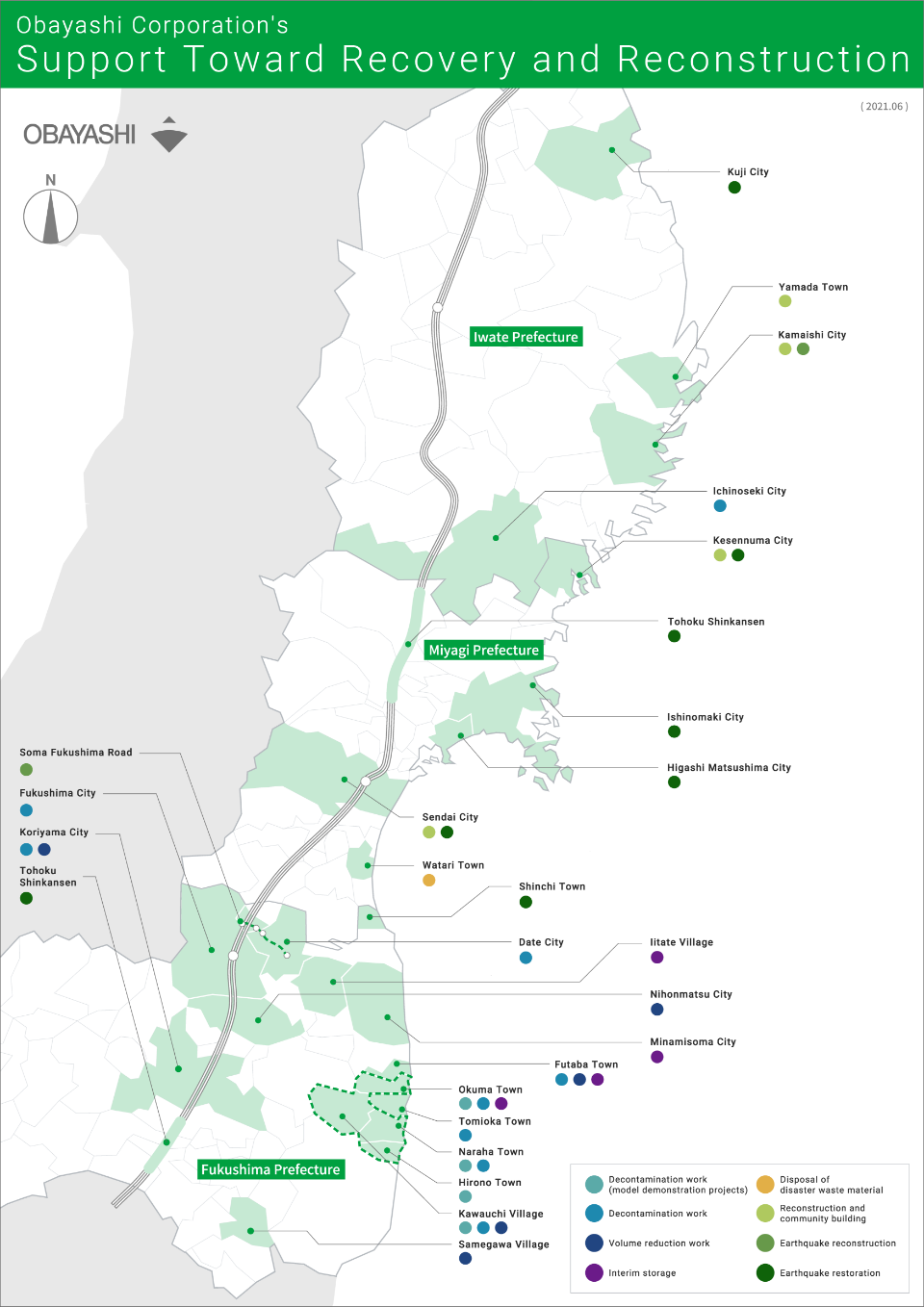 In the town of Watari, Miyagi Prefecture, the tsunami swept four kilometers inland, generating 1.26 million tons of disaster waste material. This was equivalent to about 112 years’ worth of general waste that would ordinarily be produced in Watari. A joint venture led by Obayashi Corporation was responsible for the disposal of this waste material, which involved sorting, crushing, and incinerating waste material transported from the primary to the secondary temporary storage site. First, an intermediate treatment facility provided with five incinerators, as well as facilities for crushing, sifting, and sorting waste material, was built at the secondary temporary storage site. After that, any waste collected and brought into the facility was crushed, then sorted by machine and by hand so that combustible materials could be incinerated. Then, after all the disaster waste material brought into the secondary temporary storage site was treated, the facilities were dismantled. The incinerators, which were the first of their kind to be used for the treatment of disaster waste material in Miyagi Prefecture, began full-scale operations in April 2012, with the entire process being wrapped up in FY2013.

During this project, the company started by recycling concrete and mud, then moved on to incinerator ash, which would normally be disposed of in landfills. Recycling rates were also improved by using waste material and sediment as building materials for the foundations of reconstruction projects. Constant monitoring of ash dust generated during incineration was carried out, and measurements of radioactive material contained in the ash were taken at a frequency and scope well above the legal standard to ensure that operations were being carried out safely. The company also contributed to the local economy by working with local agricultural and fishing cooperatives, along with the Chamber of Commerce and Industry, to procure materials, and by hiring over 200 local workers per day to sort materials at the facility.

The Japan Atomic Energy Agency (JAEA) was commissioned by the Cabinet Office to conduct decontamination model demonstration projects in FY2011 in 12 municipalities located in the restricted zones and planned evacuation zones within a 20-kilometer radius of the Fukushima Daiichi Nuclear Power Plant. Of these projects, a joint venture led by Obayashi Corporation was in charge of four locations in Fukushima Prefecture: the towns of Okuma, Naraha, and Hirono, and the village of Kawauchi. The objectives of these demonstration projects were to investigate effective decontamination methods for the later full-scale decontamination while also confirming the effectiveness of the decontamination, constructing temporary storage sites to store removed materials originally generated by contamination, and establishing safe working conditions in an environment with high levels of radiation.

The decontamination area covered a total of about 123 hectares and included forests and farmland, residential land, large buildings, roads, and other infrastructure. First, preliminary monitoring was conducted at the locations to be decontaminated, with the results used to determine the optimal method for decontamination. The methods tested specifically included manually cutting grass and trees, stripping away the topsoil using heavy machinery, cleaning with high-pressure washers, and wiping the roofs and window frames of buildings. After the above were carried out, another round of monitoring was conducted to measure the extent at which radiation levels had decreased, thereby verifying the effectiveness of the different methods.

Temporary storage sites were constructed in parallel with the above for carrying in, temporarily storing, and monitoring the materials removed during decontamination. The company mobilized its human and technological resources in undertaking this project—the first step toward full-scale decontamination—to achieve optimal results in a short period of time. This was despite the many limitations imposed by the sites, which were located within restricted zones and planned evacuation zones.

Subject to decontamination were houses, building structures, roads, parks, farmland, orchards, neighboring forests, and others. The works fully incorporated the needs of residents, prioritizing getting the residents, most of whom were from zones preparing to lift evacuation orders, back home from their places of evacuation so they could begin their road to recovery.

Both the Ministry of the Environment, the project owner, and Obayashi Corporation, the contractor, were new to decontamination works, despite having implemented the earlier model demonstration projects. This necessitated developing various new technologies and adopting technologies from overseas. Also, due to the enormous scale of the work force, as well as the huge number of construction vehicles and facilities involved, the company sought cooperation and support from all over the country.

The removed soil stripped away during the decontamination works was first collected at a temporary storage site, then brought to an interim storage site, which took up an area of about 1,600 hectares across the towns of Okuma and Futaba, east of National Route 6. The total storage volume of removed soil was estimated to be approximately 14 million cubic meters, of which Obayashi Corporation was responsible for over 4 million cubic meters. This work involved a series of processes which began with transporting the removed soil from the temporary storage sites to the interim storage site and receiving and sorting the soil, and ended with storing the soil in a landfill.

Since the reception and sorting of soil for intermediate storage was an unprecedented project, even internationally, Obayashi Corporation had to prepare everything from the ground up, from conception to implementation, including everything from the construction of the overall system to the concept, design, and testing of individual equipment and facilities. The company developed and installed its own equipment, including a bag-breaking machine that efficiently breaks “flecon” bags, as well as equipment for dump truck unloading.

Alongside removed soil, incinerated ash generated by burning combustible materials with high levels of radiation was also brought to the interim storage site. The ash will be stored for 30 years, after which it must be removed from Fukushima Prefecture for final disposal elsewhere. Also required are volume reduction and recycling for reducing the total combined amount of removed soil and incinerator ash, which are considered important national projects. In collaboration with Nippon Steel Engineering Co., Ltd. and Kubota Corporation, both leading companies in incineration and melting technologies, Obayashi Corporation has installed, and is assisting with the operation of, a large-scale incineration-melting furnace in the town of Futaba. Moreover, as part of the project to recycle removed soil, work is being done in the village of Iitate to reclaim farmland by using soil with a low concentration of contaminants, measured using technology developed during the demonstration projects, for the foundation of farmland embankments.

Obayashi Corporation is approaching these projects with the safety and recovery of the local community as its top priority, including employing local people and procuring materials from areas close to site.

The “disaster prevention collective relocation promotion project” involves relocating a group of residents from an area that is not suitable for residential living, such as land behind seawalls. Within this project, the company’s role is to level the land in the area where residents are to be relocated by cutting soil from mountains. Next, as part of the “land readjustment project,” in which plots of land are readjusted to provide space for public facilities such as roads, parks, and rivers, the company is tasked with raising (filling) the ground at the same places where infrastructure was located before the disaster, thereby developing the town center alongside maintaining the community. Finally, the company carries out the “tsunami reconstruction base maintenance project,” which involves developing public facilities such as hospitals and schools, as well as bases for evacuation and recovery in the event of a disaster.

As for community building based on these three projects, the municipalities affected by the Great East Japan Earthquake concluded partnership agreements with the Urban Renaissance Agency (UR) to promote new community building in each respective area.

In April 2013, the Obayashi Corporation joint venture was commissioned by UR to carry out reconstruction and community building in Yamada using a construction management (CM) system. The town center of Yamada, a town located in the central coastal area of Iwate Prefecture, was devastated by the tsunami. UR was in charge of the overall coordination of individual project areas, and Obayashi Corporation was responsible for the detailed design and construction, including any necessary surveying and measuring, as the construction manager. In addition, the company planned a housing complex for residents in need of a new place to live, which was based on the concept of allowing the original landscape of Yamada to continue into the future. The Yamada Town Yamada Chuo Apartment Complexes were completed in September 2016.

The project was awarded the Engineering Commendation Award of ENAA 2019, and was highly regarded for its pioneering and proactive use of ICT to improve productivity and quality. This included the introduction of ICT surveying at large-scale construction sites and the use of 3D models to aid in building consensus with residents.

As a symbol of the reconstruction of the heavily damaged coastal areas of the Sanriku Coast, the following road construction projects were developed. The Sanriku Coastal Road (comprising Sanriku Jukan Expressway, Sanriku Kita Jukan Road, and Hachinohe–Kuji Expressway) was designated as a Reconstruction Road, with the Miyako–Morioka Odan Road (between Miyako and Morioka), the Tohoku Odan Expressway Kamaishi–Akita Route (between Kamaishi and Hanamaki) and the Tohoku Chuo Expressway (between Soma and Fukushima) designated as Reconstruction Support Roads. Of these projects, Obayashi Corporation was in charge of the construction of the Yoshihama–Kamaishi Road on National Route 45 (a 3-kilometer section with 3 tunnels and 2 elevated bridges) as part of the Reconstruction Road, and the Kamaishi Road on National Route 283 (1 tunnel, 14 bridge substructures, and 1 bridge superstructure) as part of the Reconstruction Support Road (completed in October 2017). Using a variety of domestic and overseas technologies, the company put its efforts into opening the roads early and maintaining the durability of the structures so as to reduce maintenance after opening. The project contributed to the revitalization of the local industry and economy.

Located in the city of Ishinomaki, Miyagi Prefecture, the Saragai River within the Kitakami River System is a lifeline for the region, and it houses water supply facilities. Restoration work was carried out on 10 kilometers along both sides of the river (completed in September 2017) after the river suffered widespread subsidence along its banks. 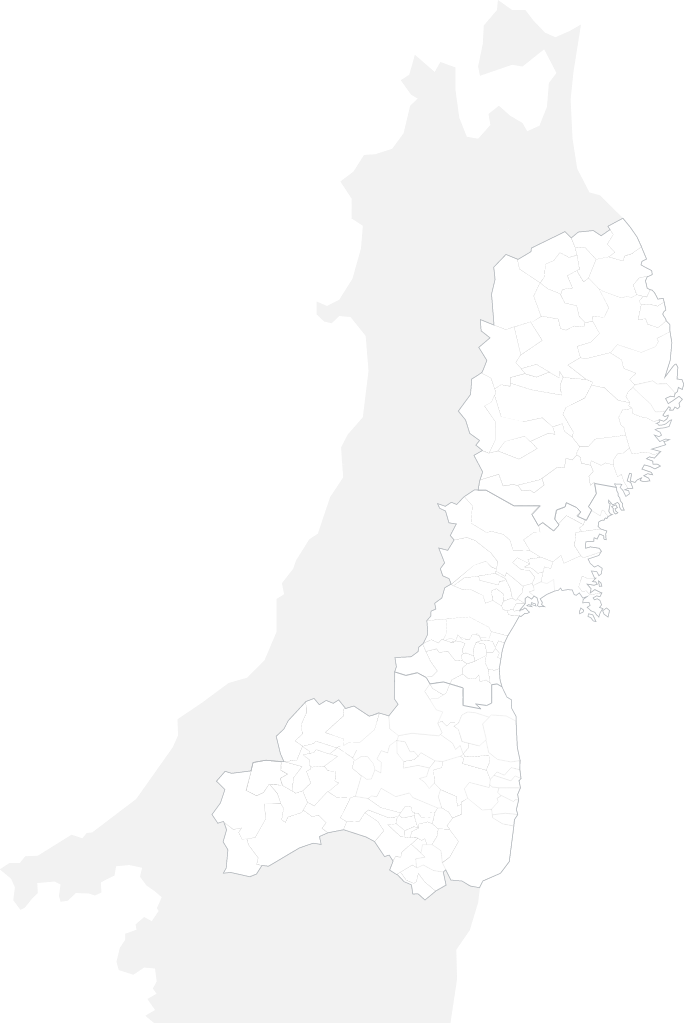 The company’s recovery and reconstruction support efforts are ongoing in various stages throughout the Tohoku region even now—from the disposal of debris after the earthquake, to decontamination and reducing the volume of waste material in areas contaminated by radiation, along with reconstruction and community building.