Completion of the Dubai Metro Urban Rail System with a total length of 75 kilometers in Dubai, United Arab Emirates

Obayashi Corporation is a member, leading Civil Works JV, of the five-company consortium that successfully completed the design and construction of the Dubai Metro Project. The Dubai Metro Urban Rail System has a total length of 75 kilometers and included the construction of viaducts, tunnels, 45 stations, depots and car parks.

The second phase of the project (the Green Line) has been completed and an inauguration ceremony was held on September 9, 2011. Operations for the general public commenced on September 10, 2011. Along with the first phase (the Red Line), which was inaugurated on September 9, 2009, the Dubai Metro Project is the world's longest driverless rail system.

The Dubai Metro is expected to ease traffic congestion stemming from rapid growth in the city which continues to show remarkable development in a difficult economic time. It is currently being used by approximately 220,000 people a day; a figure which is expected to increase in the future, as more people discover the benefit of travel on the Metro.

Obayashi Corporation successfully completed the construction of the project that has attracted major attentions in the Middle East as well as in Japan, and has contributed to the business development plans of the client. Obayashi Corporation continues to exceed expectations with high quality and safety construction built to demanding specifications and time schedule. 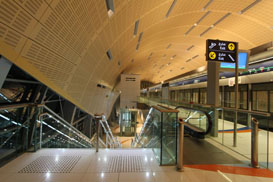 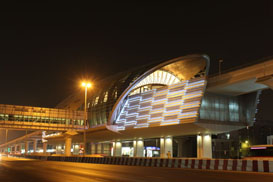 Station building with light up at night