The breakwater system is designed to swiftly rise from the sea bottom in the event of tsunami, and contribute to prevention or mitigation of tsunami impact to harbors and coastal areas. When completed, it will be the first such movable steel pipe breakwater system in the world. The three companies will undertake the construction, which will also serve to verify the system's viability, across a 10-meter span near the navigation channel as a part of a larger breakwater system that is slated for completion by the spring of 2020. The three companies plan to complete their portion by February 2013. 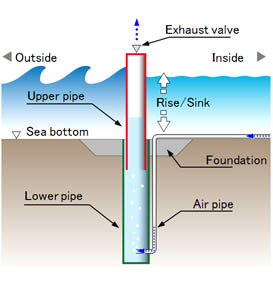 The VTB mainly consists of multiple sets of larger- and smaller-diameter steel pipes, set in a row at specified intervals in the sea bottom to form a fence-like wall when activated. In each set of steel pipes, the larger-diameter "lower pipe" set into the sea bottom houses a smaller-diameter "upper pipe" that emerges from the lower pipe and rises to the surface to function as a breakwater in the event of a tsunami or other emergency. The upper pipe is made to rise by buoyancy that is generated by blowing air into it. When the exhaust valve at the top of the upper pipe is opened, the air is expelled and the upper pipe sinks to the sea bottom of its own weight.

As the breakwater system remains in the seabed at ordinary times, it enables breakwaters to be constructed at port entrances and the mouths of rivers, something that is impossible to do with conventional breakwaters because they would block sea traffic. In addition, the new system has minimal impact on tidal currents and ambient scenery. The system's seabed mounting also makes it relatively resistant to earthquakes and corrosion, resulting in significant reductions in maintenance and management efforts. As the raising and lowering of the upper pipes are executed by simple air blowing and venting, reliable operation is feasible even in times of emergency. The time required for the upper pipes to rise to the surface and form a breakwater can be as short as several minutes.

The breakwater construction work is a project of the Kinki Regional Development Bureau of the Ministry of Labor, Infrastructure, Transport and Tourism, which plans to erect movable breakwaters, 230 meters in total length, in the navigation channel at the harbor entrance as part of a major initiative to cope with the threat of tsunamis in the Kainan district of the port city of Shimotsu in Wakayama Prefecture. The construction work on order, to be carried out by a JV formed by Obayashi, TOA and MBE, calls for the creation of a 10m long VTB near the channel, incorporating piles capable of rising from the 13.5m deep seabed to form a 7.5m high breakwater above the sea surface within 10 minutes. Nippon Steel Engineering is currently manufacturing the upper and lower pipes--the core components of the system.

Among anti-tsunami measures considered, assessments of various movable breakwater technologies were made because simply increasing the height of existing revetments poses numerous problems, including increased difficulty in ship cargo loading and unloading. As a result, the decision was made to protect potential tsunami inundation zones with the VTB, a buoyancy-driven vertical piling breakwater that does not affect navigation channels at ordinary times.

Based on this commission to construct the VTB, Obayashi, TOA, MBE and Nippon Steel Engineering will accelerate their proposal-based marketing activities for advanced systems that contribute to the prevention and mitigation of tsunami damage.

By leveraging the features of the system, the four companies will also engage in commercialization of measures to reduce the impact of high waves and high tides on port activities.