The project's owner, Msheireb Properties (※1), a subsidiary of Qatar Foundation, is undertaking the redevelopment of the historical commercial centre of Doha through 4 construction phases. In phase 3, Obayashi in Joint Venture with HBK Contracting will develop offices, residential apartments, hotel, retail facilities as well as a mosque.

This is Obayashi's first project awarded in Qatar.

Obayashi is strategically expanding its overseas businesses under our mid-term business plan. Obayashi will keep on exploring more opportunities in Qatar where demands on construction, not only for infrastructure, but also for projects such as stadium for FIFA World Cup 2022, are increasing. 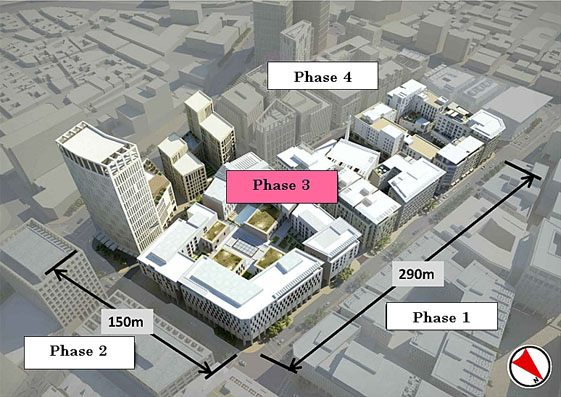 Msheireb Properties is a real estate company and a subsidiary of Qatar Foundation. The company was established as a commercial venture to support the Foundation's aims as well as the realisation of Qatar's 2030 Vision.

Msheireb Properties' mission is to change the way people think about urban living and improve their overall quality of life, through innovations that encourage social interaction, respect for culture, and greater care for the environment.

Msheireb Properties spent three years researching Qatari architecture and numerous approaches to urban planning all over the world with the most respected experts in the industry - in order to realise an architectural language rooted in the best of the past that may be preserved for and by future generations.

The company's name, Msheireb, means 'a place to drink water' and is the historical name of the downtown area of Doha. The company's corporate identity depicts the mouth of a stone well, a feature of traditional Gulf societies, and its distinct ink effect evokes classical Arabic calligraphy.