As is shown in the Medium-Term Business Plan 2012, Obayashi Group has been promoting its' strategic deployment to overseas markets. North America represents a significant strategic position in Obayashi's overseas business. Obayashi has been methodically expanding its' presence in the North American construction marketplace. Prior to the recent acquisition of KNA, in 2007 Obayashi acquired ownership of Webcor Builders, an American general building contractor, as well as ownership of Toronto, Canada based Kenaidan Contracting in 2011. The net sales of the North American operations in fiscal year 2013 was ￥157 billion (JPY), which included ￥118 billion (JPY) from general building construction (Obayashi, E.W. Howell, Webcor Builders, J.E. Roberts-Obayashi and others) and ￥39 billion (JPY) from heavy civil engineering operations (Obayashi, Obayashi Canada and Kenaidan). The North American operations accounted for more than 50% of all overseas business generated by Obayashi Group.

Background of the Agreement

Obayashi considers the construction market in the U.S. as one of great significance; one which is expected to have stable growth and will continue to be attractive for future business. Stable growth is evidenced by not only the need for replacement/maintenance of existing aging bridges and other infrastructure, but also the need for investment in new construction of highways and railways.

Obayashi was the first Japan-based general contractor awarded a public construction project by the City of San Francisco in the 1970's. Obayashi has been developing its' heavy civil engineering business in North America for many years with the completion of more than 80 projects. Obayashi's technological advantage has provided for successful tunnel projects.

It is expected that the Obayashi Group will not only expand its' general construction business in the U.S. public sectors, but will also increase involvement with CMGC (Construction Manager/General Contractor) projects. It is anticipated that the synergistic effects of combining Obayashi's credibility, technology and management capabilities with EKS' technical and business know-how in the U.S. markets will be instrumental in the expansion efforts. Obayashi further believes the collaborative efforts among the newly acquired KNA and other Obayashi Group member companies will certainly contribute to diversification and expansion of all the subsidiaries.

Obayashi believes this acquisition will enhance Obayashi's global overseas business strategies; therefore, Obayashi has entered into an Agreement with EKS to acquire KNA as a consolidated subsidiary of the Obayashi Group. The current top management of EKS will continue to manage KNA.

1. Brief of the Newly Consolidated Subsidiary 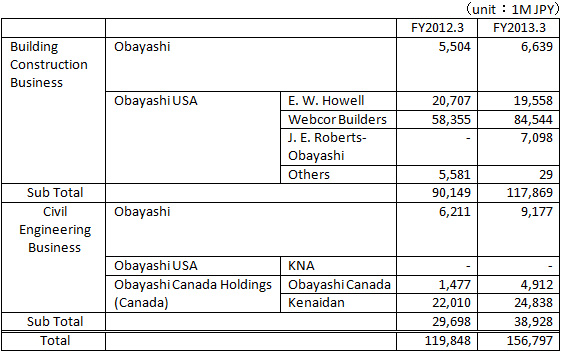