The aim of this Project is to ease traffic congestion and improve access to the city of Auckland where a third of the country's population resides. It is the country's largest road project and includes a 2.4km tunnel under residential areas. The outer diameter of the tunnel boring machines (TBM) utilized in the construction project is 14.46m, which is the largest scale undertaken not only in Japan but also in the world.

On October 31, 2013, the Transport Minister Mr. Gerry Brownlee and the Auckland City Mayor Mr. Lee Brown were joined by 150 guests at a ceremony to celebrate the launch. Finally, with great anticipation and after a two-year preparation period - initiated when the project was award - the 14.46m diameter TBM commenced excavation on November 8, 2013.

【Ceremony to celebrate the launch】 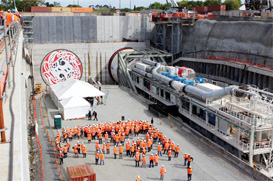 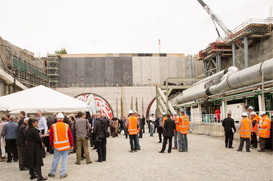 Obayashi contributes to the Waterview Alliance through its experience in large-diameter TBM tunnelling projects in Japan such as the Tokyo Bay Aqua Line and the Central Circular Shinjuku Route of the Metropolitan Expressway, which were delivered in short construction periods and with minimal ground settlement. As Obayashi proceeds thorough the next 23 months of the tunnel construction phase of this project, we will utilize the experience and technology we have gained to date and continue to innovate and improve this as construction continues.

This TBM is one of the world's largest scales which were manufactured by Herrenkncht, a German manufacturer of TBMs. This is the first time the Spoil Visualization System developed by Obayashi is being applied to an overseas project. 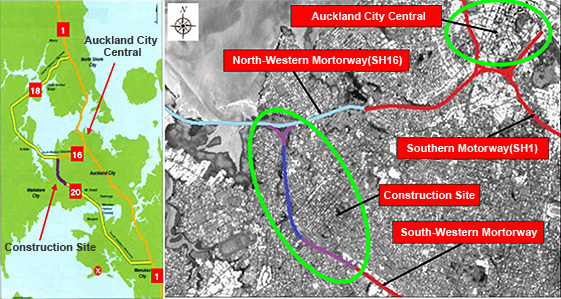 Cross-section of the tunnel