Acted as President of the Beavers Heavy Engineering Construction Association

In the 1970s, Obayashi, as the first Japanese construction company engaging in the United States public-works project, received an order for San Francisco Sewer. Starting with the success of this project, Obayashi now have been working on more than 80 projects in the United States, and joined the Beavers in 1985. 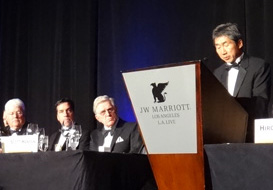 Mr. Onozaki, the host of the annual Awards Dinner, looked back over the Obayashi's history of the past 30 years he built up with his associates 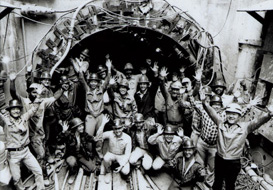 Since Obayashi's contribution and integrity for the heavy engineering construction industry in the United States was highly recognized, Hirokazu Onozaki, senior general manager of North American Regional Headquarters, was designated as the 2013 president of the Beavers. In addition, it is honor to announce that Mr. Onozaki is the first president who is not a citizen of the United States in this association.

As the completion of his president term, Mr. Onozaki played as the master of ceremonies at the Beavers' 59th annual Awards Dinner on January 17, 2014 in Los Angeles.

Making full use of our advanced technology and experience, Obayashi will continue to engage in global construction projects with the aim of supporting the world's development.

※1 The Beavers
The name "Beavers" derives from a braver, often called an ecosystem engineer, which can steadily create ponds and wetlands using natural materials. Beavers' way of life and the construction industry are very alike.