Tokyo, November 13, 2012 - Mitsubishi Heavy Industries, Ltd. (MHI) and Obayashi Corporation have jointly developed a "radiation-shielded seat" that suppresses radiation exposures of industrial vehicle operators working in radiation-contaminated areas. The seat incorporates body armor-like radiation shielding developed by combining MHI's radiation shielding technology based on development and production of special vehicles, and Obayashi's decontamination experience, with a target of suppressing radiation exposure of operators by 50%. MHI will begin marketing the seat in mid-December as an easy-to-use tool to reduce radiation exposure risk of operators engaged in work such as decontamination, debris removal and waste transportation using hydraulic excavators and other industrial vehicles.

The two companies developed the radiation-shielded seat in anticipation of use in various situations, specifically: work performed on the premises of the Fukushima Daiichi Nuclear Power Station operated by Tokyo Electric Power Company, Inc. (TEPCO) and decontamination work at nearby high-dose radiation areas; transportation of nuclear waste at interim storage and volume reduction facilities currently under consideration by the Ministry of the Environment; and uses in the event of a severe accident at other nuclear-related facilities. Installation of the new radiation-shielded seat can save cost, time and labor compared with procurement of special radiation-shielded vehicles or conversion of currently operated equipment to radiation-shielded vehicles.

The seat material, including body armor parts (shoulders, arms, chest/abdominal area, thighs, neck), consists mainly of tungsten sheet, which offers excellent radiation shielding capability. Although the seat weighs a considerable 130 kilograms (kg), individual parts weigh less than 20kg and most of their weight is integrally supported by the seat, so the burden on the operator is minimal. In addition, the operator can put on and remove the armor-like parts easily by opening/closing the front like a vest, and each part is adjustable in the front-back and up-down directions. Together these features provide a high rate of radiation shielding while simultaneously minimizing fatigue during continuous work and inconvenience to machine operation from wearing such shielding.

Going forward MHI and Obayashi will take further steps to prepare for launching the new radiation-shielded seat on the market. These include possible verification testing of shielding efficacy in actual radiation-contaminated areas, and initiatives to further improve the seat's user-friendliness and its shield factor. Joint efforts will be directed into proposing adoption of the new seats by construction companies performing decontamination work, operators involved in the construction or maintenance of contaminated waste incineration facilities, power providers, etc. MHI will be responsible for manufacturing aspects.

Starting immediately after the Great East Japan Earthquake disaster of March 2011, MHI has been proactively cooperating in the response to the accident at the Fukushima Daiichi Nuclear Power Station. For example, the company delivered forklift trucks with radiation-shielded cabins, performed conversion work on the "Mega-Float" provided to TEPCO by Shizuoka City to store contaminated water pooling at the reactors, and delivered and installed storage facilities for radioactive sludge produced during treatment of contaminated water. In addition, in July 2011 MHI established Disaster Prevention Project Group within its General Machinery & Special Vehicles division tasked with developing and marketing disaster prevention-related systems and equipment.

Obayashi has also been broadly involved in efforts to deal with the aftermath of the earthquake disaster. It was in charge of a decontamination model test project targeted at four communities in Fukushima Prefecture, and subsequently it has performed decontamination work on full scale and undertaken a decontamination verification project aimed at reducing the level of radioactivity of incinerated ash. Going forward, Obayashi will carry forward with technology development in aspects such as decontamination, volume reduction, storage and community planning, devoting companywide efforts to recovery and restoration work to enable an early return to safe living with full peace of mind.

MHI and Obayashi plan to undertake joint initiatives to promote adoption of their newly developed radiation-shielded seat, as part of their ongoing support efforts to secure an early recovery in the devastated region. 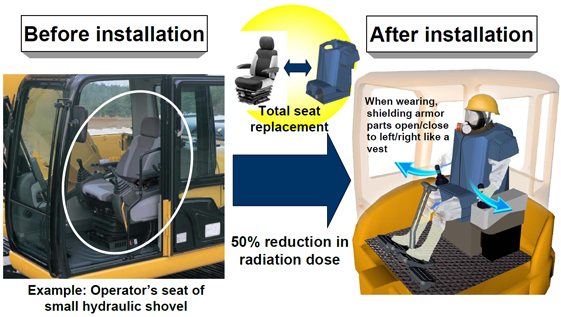